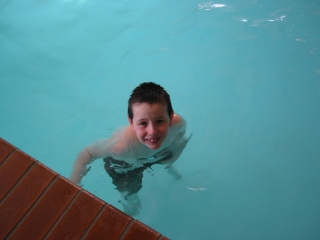 I stared at the water my heart thumping.  I knew what was about to transpire and could barely contain my excitement.  I was about to plunge into the exhilaration of being one with the water.  I had done this so many times before, but looking at the clear sparkling surface I knew this would feel like my first time again.  The water called to me and I answered.

Someone brushed my shoulder and I jumped because I was not paying attention to my surroundings as I was solely occupied with the water.  I barely registered that my trainer was talking animatedly to me.  She was trying to make sure I understood the situation and what I was supposed to do.  I knew what I was supposed to do, haven’t we done this before?  I was to swim and swim I would.  Joy was pointing to the other end of the pool where she would be waiting for me.  I was supposed to swim to her as fast as I could; “this is a race” she was telling me.  A race?  Do I really care about a race?  No, the water is what holds my complete attention, but I didn’t tell Joy that.  I nodded my understanding and she left me be.

I turned and looked into the stands.  All the people that came to watch were talking amongst themselves passing the time until the race began.  I wondered where my parents were, ah there they are: right in the front row not talking to each other, but focused on me.  My mom looked at me and I thought I saw tears running down her face.  Must be a mistake, a trick of the light, it was very humid in the room because there was a swimming pool here after all.  My dad gave me a thumbs up, I returned the gesture and focused on my brothers.  Both of them were laughing with each other.  One of them caught my eye and winked and waved.  The other followed suit and shook his hand fiercely in the air at me.

I turned back to the water.  The clear blue water seemed to be breathing.  Calling me by name, softly, persistently.  I replied that it must be patient, that Joy would get mad if I succumbed to the call too soon and so with much difficulty I waited.  When would this so called race start?  The water needed me as much as I needed it.  How much longer would they keep us two friends away from each other?  Joy must have known how much effort it was taking for me to hold myself back because she looked at me with understanding and gave my shoulders a quick squeeze telling me to be patient.  Soon, she said.

There was a bustle of activity going on around me that barely registered in my brain.  I glanced around and noticed the other contestants were approaching the water just like I had already done.  Did the water call to them too?  The water must have a great many friends but I knew that it had a special place for me.  The water was so abundant that I had no doubt it could have a special place for everyone.  I couldn’t wait to jump in and be in my special place though.  How much longer?

There was someone speaking now.  What was he saying?  He sure had a loud voice.  I think he must be talking to the people in the stands because everyone was looking at him.  I looked at him too.  He had a kind face and spoke with authority.  Was he telling us to get into the water?  I trembled with excitement.  Was I supposed to go now?  I looked at Joy and she shook her head at me.  I must wait.  How much longer?

The other contestants were now lining up along the edge of the pool.  With a giddy jump I sprang to the edge of the water and greeted my friend with a grin.  The water seemed to smile broadly back at me welcoming me into its presence.  I stood rooted to the spot in a tranquil state of mind, I couldn’t wait!  How much longer?

Someone was yelling at me.  Why did they try to interrupt my conversation with the water?  I tore my eyes away from the water and noticed nobody was along the edge of the pool anymore, they were in it.  I missed the signal!  With an anguished cry and a shout of triumph I plunged into the water.  The water flowed over me, soaking me, hugging me.  I hugged it back.  It’s so great to see you I told the water.  It returned the affection in its pressure hug it gave me.  My head broke the surface of the water and my face conveyed all the happiness in the world I had at that moment.  This is where I belong, this is it!

I looked about the water and wanted to explore everything with my friend.  I began stroking out to the deep water.  The water and I’s friendship was deep so that seemed like the best place to go.  Deep.  I wanted to take our friendship deeper.  So I began to swim to the deep end.

More shouting, what do they want now?  I finally have what I have wanted all day.  What could they possibly want?  I ignored them and gave my complete attention to my friend, the water.  With a shout I jumped and continued on my way to the deep end.  How fun this is!

The shouting continued.  I glanced back and noticed Joy was in the water too.  Uh oh, I knew that look.  She was going to rain on my parade.  With greater enthusiasm I kicked and swam towards the other end of the pool.  She wasn’t going to stop me and the water having our fun.

Joy was much faster though than I was.  Her and the water must be more acquainted than I was.  She caught up to me and tried to tell me what was supposed to happen.  I didn’t care.  Who cares about a race when I have all I want right here?  Was being the first to touch the other end of the pool really what mattered?  I didn’t think so.  Being in the water was what mattered to me.  I was happy where I was.  Winning a race would mean nothing to me.  Would winning the race bring me fame and fortune?  No.  Would winning the race make me happy?  No.  Would swimming in the water with a friend make me happy?  Absolutely!  So why did I care about winning this race?  It seemed to matter to Joy though.  I wondered if it mattered to my family that I won the race.  Would me winning the race make them happy?  I didn’t know.  Would me being happy make them happy?  I didn’t know.  All I knew is what would make me happy and so I decided to act on it.

Joy, however, was not about to let me let this race idea die out.  She pleaded and coerced.  Then the thought entered my mind that I wanted to make my parents happy.  They wouldn’t be happy if I didn’t listen to Joy.  So reluctantly and hesitantly I followed Joy’s lead back to the edge of the pool.  I spent every instant making minor detours and goofing around with my friend, the water.  Joy could see that and didn’t waste her effort on it because I was slowly going the way I was supposed to, to the edge of the pool.  We approached the edge of the pool and Joy climbed out and motioned for me to follow.  I looked around; there was nobody else in the pool.  I had lost the race.  I had lost the race and yet I won as well.  In doing this I won happiness, I won a feeling of satisfaction, I won love.  That is so much better than being in first place.

I slowly and grudgingly climbed out of the pool.  I looked back at my friend the water and tried to say good bye, but couldn’t.  Don’t worry, the water told me, you’ll see me again soon.  That gave me comfort.

At this point I was overcome by a hug from my mom.  I hugged her back.  She said how proud she was of me.  Apparently winning the race had no effect on my parents’ happiness.  I smiled inside and walked with her and my family out of the room.

I totally won the race that day.

————————————–
2/12/10 written by Andrew Kinstetter
“This is my attempt to write from the perspective of my autistic brother.  This is how I imagine that he viewed the Special Olympics’ race that day, obviously his perspective is a whole lot different than how I viewed the race.”